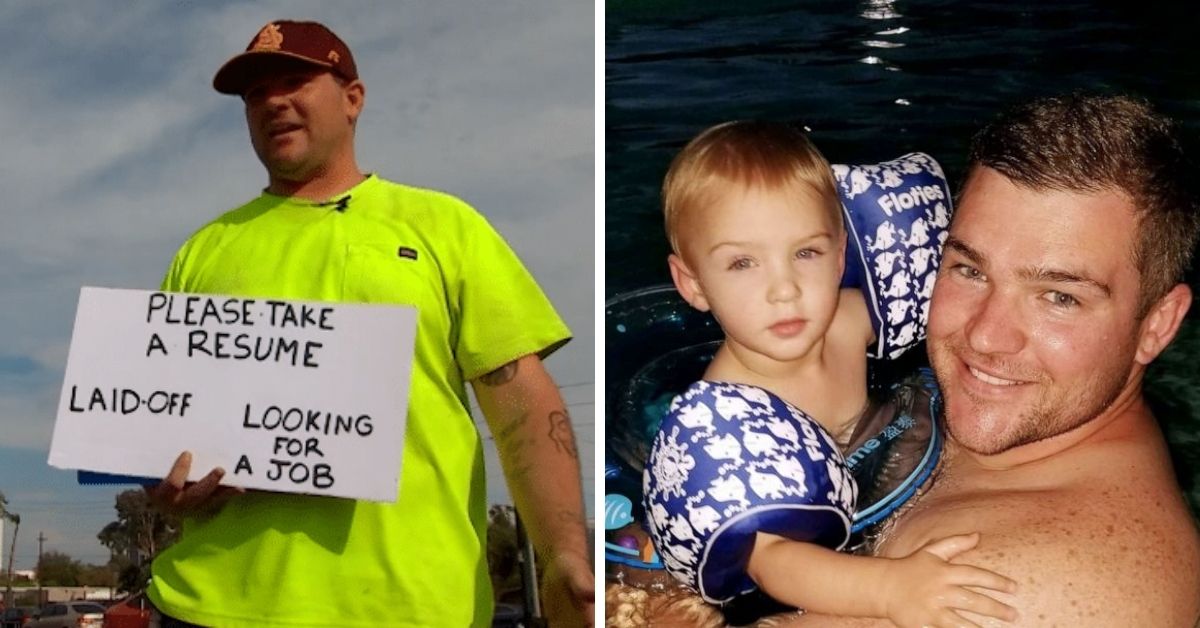 Being without work can be scary and overwhelming, especially when you have a family to support. But after one man unexpectedly found himself in this situation, his quick thinking paid off in a big way.

As a father, he couldn’t afford to be without work

Patrick Hoagland is a 30-year-old dad of one who was suddenly laid off from his job at a metal recycling company. He was desperate to find another job – and in this economy, that isn’t very easy.

“I definitely had fear,” Hoagland told Good Morning America. “My wife and I, we don’t make a whole lot of money individually. Once I lost my job, everything was put on her.”

So a month after being laid off, he decided to stand on a busy roadside of a Phoenix highway and simply hand out copies of his resume!

“I had only been unemployed a few weeks, but it was very unexpected and I needed to figure something out fast,” Patrick told CNN.

I at first laughed and thought that was silly, but I kept thinking about it. I figured, why not?! There are millions of people in Phoenix driving around, someone might hire me.

While the idea might have sounded ridiculous on paper, he still decided to go forward with it and printed out 200 copies of his résumé.

He tried applying the traditional way, without luck

Before figuring out his unconventional strategy, Patrick had tried to apply to many jobs, both online and in person. The lack of response eventually led to his idea.

“I wasn’t getting any responses,” he said. “I was getting frustrated. It popped into my head, stand on a corner and hold a sign and hand out resumes. At first i laughed about it…and then it kind of went crazy.”

For three days, for a few hours each day, Patrick handed his resume out to strangers. He also held a sign which read “Please take a resume. Laid-off. Looking for a job.”

During one of these sessions, a woman named Melissa DiGianfilippo, owner of Serendipit Consulting, passed by.

He caught the attention of the right person

During one of these sessions, a woman named Melissa DiGianfilippo, owner of Serendipit Consulting, passed by.

“I was impressed with Patrick because it was 110° outside and what I saw was really unexpected,” Melissa told CNN. “He was standing on the side of the road with a sign and a stack of resumes and a huge smile on his face.”

Melissa, who works in PR , noticed how much creativity this move took, so she grabbed a copy of his resume and decided to post it on social media.

“I figured, ‘I have a pretty wide network. I’ll share on social media,’” Melissa said.

I think people were impressed with this willingness and dedication to stand in 100-degree heat.

From no response to 100s of job offers

The job offers began to fly in by the hundreds, and he eventually found a position at Flatline Concrete as a concrete grinder. It wasn’t just any job, but one he had actually hoped for.

They reached out to me over email phone, and I am glad that they did. It’s my dream job scenario.

Most of all, Patrick is thankful for everyone who has helped him get to his dream job.

“I can’t say thank you enough to everybody,” Patrick said. “I had a lot of people who sent messages that weren’t necessarily job offers but were well-wishes [saying], ‘Good luck in your search.’ It was nice to see that.’”

Patrick and Melissa DiGianfilippo have kept in touch, and he is so thankful.

She has been so great, she didn’t need to help me, but she did and it has changed my life. I am so grateful for her.

Take a chance on yourself

Rather than admitting defeat, Patrick decided to get creative. While it takes a lot of courage to put oneself out there the way he did, it ultimately speaks of your resilience as a person. It spoke for itself in the way Patrick took a risk for himself and his family. And it paid off.

Remember, while we cannot control circumstances or what happens to us, we can definitely control how we react to them. And that can make all the difference.

How to Break Bad Habits and Get 1% Better Every Day | James Clear Motivation 2020
After Hitting Rock Bottom, She Lost Over 150 Pounds And Turned Her Life Around
Businesses, cities look to give Canadians outdoor rec options during pandemic winter
Please Don’t Wish Your Days Away
A 26-Year-Old Woman Adopts 14 Homeless Children She Met While Volunteering