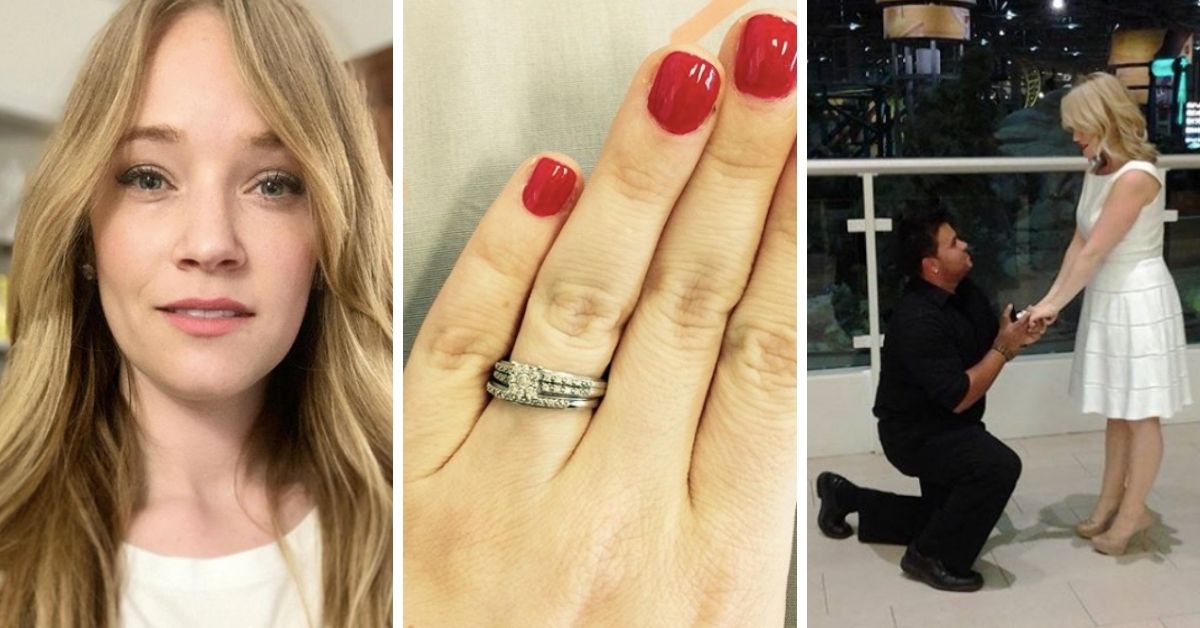 The age of social media has created a certain degree of FOMO, where everyone is always coveting everyone else’s vacations, cars, fancy dinner but bigger and better. Social media fosters this unconscious drive to compete with others, no matter what we’re talking about. And in some cases, it can make us lose sight of what’s really important.

This a lesson Rachel Pederson taught the world, when news of her engagement went viral–but for the wrong reasons. She made sure to set the clock right.

They shamed her for the engagement ring

When Rachel Pederson posted her engagement ring, she got an unexpected response. Rather than the heartfelt congratulations, some friends and family members family suggested that it was too small.

She ended up going on Facebook to share how there was a deeper meaning
behind her small engagement ring and why she was refusing an “upgrade” to the
ring she already fell was perfect.

“Friends and family often ask me when I’m going to have it ‘upgraded’…. After all, it doesn’t represent the level of success we are achieving,” Rachel wrote in her now-viral Facebook post.

Wait a minute…. Since when did the size of someone’s ring become an indication of success?! For me, the ring is SO much more.

Love is more than the size of a ring

Rachel met her beloved on casual date. Her best friend (and now sister-in-law) set Rachel up with her husband’s brother Poul Pederson, and the two bonded instantly.

Just one week after meeting, Poul and Rachel had fallen hard for each other. “Initially we were going to wait 6 months so people didn’t think we were crazy,” Rachel shared with The Knot.

“Just a few days after that, we determined we would elope and get started on our life together,” she continued.

He was a window washer, and I was a single mother.

So 13 days after they met, when Poul surprised her with a formal proposal and her small engagement ring just before they were going to elope, the ring was forever tied to their “storybook, whirlwind, ‘make you sick’ love story,” no matter the size.

“He surprised me with the ring at the Chapel of Love at the Mall of America! I had no idea he was going to propose on one knee… Or even that he bought me a ring! I had completely forgotten to get him one, but his surprise meant the world to me,” Rachel told The Knot.

They said she should have her ring upgraded

But soon after getting married, people began to comment on the engagement ring being a ¼ CT. diamond.

I’ve even had one person say, ‘You could wear a bigger ring for important events, so people don’t think you’re not successful.’ Since when did the size of someone’s ring become an indication of their success?!

Rachel told The Knot, “It made me wonder if a big ring was needed to prove our love… But a part of me felt stubborn. Their intentions weren’t wrong, but I realized that other women had probably felt the same.”

The small engagement ring and wedding band maybe was valued at less than $1,000 but to the couple, it was “was perfect.”

He had spent all he had to buy me the ring, and that was incredibly special.

What is a marriage without love?

When asked if she’s ever dreamed of a bigger engagement ring the small business marketer said, “Of course I have! I love diamonds… But what is a diamond without a rock solid marriage?”

“To me, a ring is just a token. It tells a story. But a ring
symbolizes marriage, it doesn’t define a marriage,” Rachel told The Knot. “Our
ring, our story are so special to us,” she added, saying her husband also feels
they shouldn’t ever upgrade because of their personal story.

With over 178,000 reactions on her Facebook post she said,
“The outpouring of women saying ‘yes! I agree!’ was so rewarding. I’m not alone
in my thoughts about the ring,” telling The Knot, “Now after this public
statement, I won’t ever upgrade my ring.”

“It tells me that in a society that continually screams ‘bigger is better!’ there are others who are searching for a greater and more foundational truth about marriage.”

Rachel and Poul found love in each other, and for this bride, their marriage shines brighter than any diamond ever could.

As she said in her Facebook post, “He drained his savings to gift me with a small token of his love. I say small, only because it pales in comparison with how big his love is, even now, after years of marriage. That, my friends, is success to me.”

It can be easy to ascribe disproportionate value to material things in the society that we live in. This is why Rachel’s story is a great reminder to look beyond the material and appreciate people for who they are, not what they can offer.