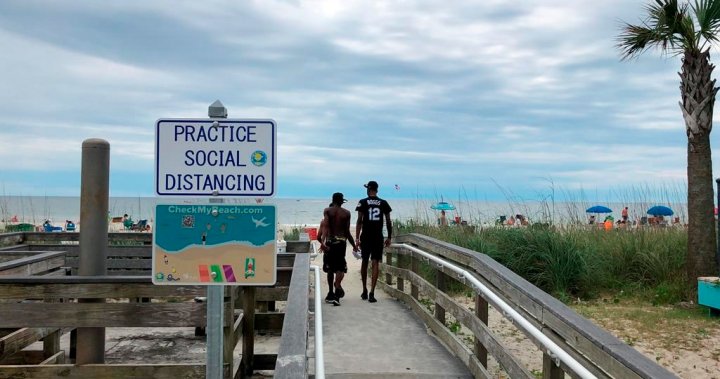 Over the last few weeks, dozens of Canadian politicians have been facing scrutiny over their decisions to leave the country during a global pandemic while their constituents were asked to stay home to quell surging cases of the novel coronavirus.

Some, like former Ontario finance minister Rod Phillips and former Alberta municipal affairs minister Tracy Allard resigned, while others such as New Democratic Party MP Niki Ashton and Liberal MP Sameer Zuberi, relinquished their committee positions. Politicians have voters to answer to, but what about the average Canadian?

That depends entirely on the workplace, experts say.

Read more:
The Canadian politicians who travelled over the holidays during a coronavirus pandemic

Is your workplace unionized?

Whether your place of work is unionized can have a large impact on what constitutes as grounds for firing.

Fathima Cader, a Toronto-based human rights, labour and employment lawyer, said unionized employees have more protection from termination than an employee who was not in a union — although in both cases, anyone fired is entitled to some sort of severance package.

She said a non-unionized employee can be fired for a specific reason, but they can also be fired “at any time for any reason” that isn’t discriminatory.

“They don’t need to have you do something egregious. They don’t need for you to have broken a corporate law for them to terminate you. They could just simply say: ‘It’s just not a good fit. It’s not working out. There’s someone else that I’d like to have do this work,’ and say, ‘thank you for your service and here’s your severance package,’” explained Cader, who is also a McMurtry Fellow and visiting professor at York University’s Osgoode Hall Law School.

“If you’re not in a union, the only protection you have against termination is that when the employer terminated you, they have to give you reasonable notice — and that’s either money or time.”

This advanced notice can vary, depending on the type of work a person did or how long they worked for the employer, Cader said.

She described it as a “safety net,” or a “cushion while you look for another job.”

Unionized employees, on the other hand, can only be fired for a reasonable cause.

But then the question is: What constitutes cause?

Will your trip embarrass the company?

If an employee’s actions embarrass their company, an employer could consider that cause for dismissal.

“If you have done something that puts them in a really bad position, where it undermines their integrity in the public image, particularly at a time when we are seeing every day increasing rates of infection … and you are unable to present a justification for that behaviour, you might see yourself at risk of a for cause termination,” Cader said.

But the severity of this can vary, she said, depending on where a person works.

Lior Samfiru, co-founding partner with Toronto-based employment law firm Samfiru Tumarkin LLP, said it’s “very important to distinguish between those that may have a public profile and those that don’t.”

Certain jobs like politicians, journalists and front-line workers, for example, are expected to keep their employer’s interests at heart, Samfiru said, adding that employers have the legal right to take disciplinary action against staff who made them look bad by going against agreed-upon rules.

“Those employees will be held to a higher standard and the disciplinary disciplinary measures are going to invariably have to be harsher in those situations.”

Has your employer asked you not to travel?

According to Samfiru, an employee can “absolutely” be disciplined — and even fired — if they flout public guidelines and it impacts their workplace.

This can range from travelling abroad, to refusing to self-isolate after possible exposure to the virus or not wearing a mask. On the flip side, Samfiru said travelling abroad and then not being able to attend work for two weeks in order to safely quarantine or preventing others from working by infecting or possibly exposing other co-workers to the virus could also constitute for grounds for dismissal.

“An employer has an obligation to keep everyone safe in the workplace. And if an employee irresponsibly endangers others in the workplace, that employee can absolutely be disciplined,” said Samfiru.

There, is, however, grey area. If an employer never specifically asked their employees to avoid travel and no rules are breached, they can’t technically be fired.

“They may have done something wrong from a common-sense standpoint, but they wouldn’t be breaching any order, any directive,” Samfiru said.

Brené Brown with Kevin Oakes on Cultural Renovation (i4cp login required)
Elon Musk’s Reaction To Brief Stint As World’s Richest Was Asking How To Give His Fortune Away
If You Want to Change the World, Start Off by Making Your Bed – William McRaven, US Navy Admiral
You Will Never Look At Life The Same | Jordan Peterson
You’re Allowed To Say No